Paula Fitzpatrick helped to install this exhibition in a beautiful exhibition space in Rathmines Library. Thanks to Helen, Eoin and all the staff. Alwyn Gillespie conducted really successful workshops as is evidenced by the images below:

The exhibition was installed and launched in the Lexicon Dún Laoghaire on Tuesday 3rd May. Marian Keyes, Executive Librarian, who invited Little Stories Little Prints to the Lexicon for the month of May, organised and spoke at the launch that evening. Claire Halpin, who introduced me to Marian and Marian to the project, helped with the install. Claire was one of several who spoke at the launch about their prints. Other artists who spoke were Siobhan Cuffe, Ruby Staunton, Wil 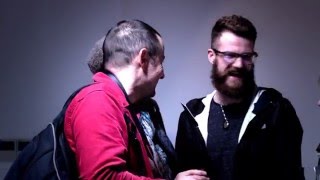